Her name was Holly, and she was an angel.  The other day I was working a flight, and a very nice flight attendant sat next to me.  We immediately bonded and began talking about God, heaven, miracles, relationships and everything in between.  I was so surprised at how open we became talking about God, Jesus, and angels.  It was as if our souls had seen one another, and were immediately drawn to each other.  She gave me a word of God, that helped me tremendously.  She was inspiring, and I knew that she was an angel from God.

The next morning I woke up at the hotel, and was downstairs having breakfast before our shuttle left for the airport.  As I was eating, there was a very nice flight attendant sitting across the table from me.  I didn’t know her name so I looked at her name tag.  Her name was Holly! I wasn’t sure what it had meant at first that both flight attendants had the name Holly, then I prayed about it and asked God later on in the day.  God told me that meeting Holly in the morning verified everything that Holly had said the day before was true.

Angels come to us just when we need them, and sometimes they can come to us in forms of humans.  Sometimes we are even called earth angels.  I know that I am an angel on this earth, here to help this planet and everyone on it.  If you want to know if you are an earth angel, simply ask God, and then trust the answer you are given.  I know all that read this are earth angels.  I love you! 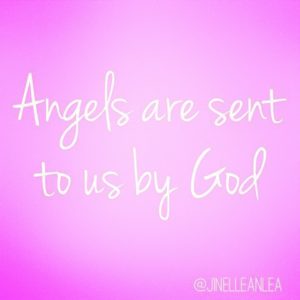